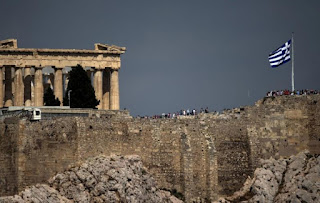 A Greek debt relief scenario that put back interest payments until 2048 would mean the nation's euro zone creditors deferring receipt of up to 123 billion euros ($138.7 billion), according to a forecast by Germany's Finance Ministry.

The ministry's calculations, which were contained in a letter to a member of parliament seen by Reuters on Friday, contemplated the various restructuring scenarios laid out by the euro zone bailout fund, the European Stability Mechanism (ESM).

"With such an interest deferral, it would de facto be a new loan with a volume that depends on the development of interest rates," the document said. "The estimated volume of the deferred interest up until 2048 would be around 118-123 billion euros."

The Finance Ministry declined to comment specifically on the paper.