Greece Gets Investor Thumbs Up on Possible Return to Bond Market 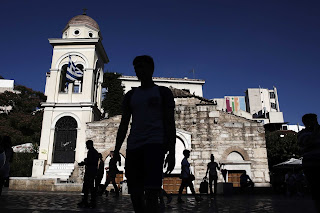 If Greece returns to the bond market this year, Mark Dowding would be a buyer.

“We have been bullish on Greece over the past year or so,” said the partner and portfolio manager at BlueBay Asset Management in London, which owns some long-dated Greek bonds. “We’ve also formed the view that lenders would remain committed to helping Greece. I feel relatively confident that Greece will be returning to market in the second half of this year.”

The change in sentiment toward Greece -- the epicenter of the European financial crisis -- is reflected in the fact that country’s bond yields are the lowest since before the turmoil even as the debt remains deep in junk territory. Adding to investor confidence, Greece’s euro-area creditors agreed to release 8.5 billion euros ($9.5 billion) in new loans on June 15 even as they postponed until mid-2018 a binding decision on what measures they will provide to ease the country’s burden.

Although Athens has not definitively said it will be selling bonds this year, many in Prime Minister Alexis Tsipras’s administration say the question is not if but when. A successful second bailout review, an improved economy and greater support from euro-area partners may embolden Greece to consider a return to the market for the first time since 2014. All indications are that yield-hungry investors would welcome new Greek paper even though the country isn’t part of the European Central Bank’s quantitative-easing program. 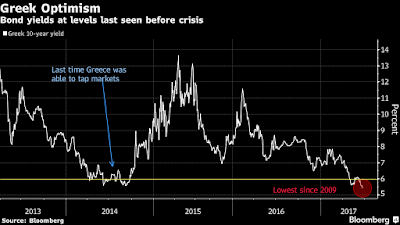 Posted by Yulie Foka-Kavalieraki at 8:06 AM