Greece Gets a Break in Its Seven-Year Drama 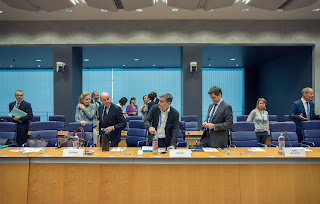 As last-minute Greek bailout deals go, this one wasn’t the worst.

The euro region’s finance ministers approved 8.5 billion euros ($9.5 billion) of aid on Thursday, and its most indebted state got a commitment that creditors will make sure it’s able to service future debt. If necessary, repayments can now be extended on emergency loans by up to 15 years.

While not perfect for anyone, it was a product of compromise. Germany agreed to come up with some figures on possible debt relief and to less ambitious budget targets. The International Monetary Fund then lent its credibility to the Greek bailout, if not its money. Greece got some cash and clarity.

Typically for these trade-offs, painful decisions were postponed and everyone will have to sit down again in a few months. But it feels like a question was answered, one that’s lingered since Prime Minister Alexis Tsipras clashed with Brussels over Greece’s crippling austerity two years ago: whether the country is a sustainable member of Europe’s single currency.