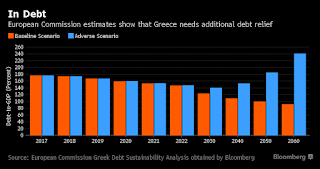 Greece will need additional debt relief to regain the trust of investors, even though it’s likely to exit its bailout with a 9 billion euros ($10 billion) cash buffer, the European Commission said in a draft report obtained by Bloomberg.

The country’s 86 billion-euro third bailout program from the European Stability Mechanism, agreed by Prime Minister Alexis Tsipras and European creditors in 2015, will expire in August 2018 with 27.4 billion euros left unused, the commission estimates in the so-called “compliance report” dated June 16. Disbursements up to then should also “cater for the build-up of seizable cash buffer” of around 9 billion euros, according to the document.

The report contains an analysis of the country’s public debt that points to potential wrangling with the International Monetary Fund following an agreement last week to disburse bailout funds, in which the Washington-based fund only agreed to a new program “in principle.” Even as the commission’s analysis points “to serious concerns regarding the sustainability of Greek public debt,” its assumptions about the country’s future growth prospects are still more optimistic than those of the IMF.