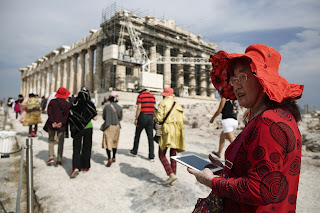 The European Central Bank is unlikely to include Greek bonds in its asset-purchase program for the foreseeable future, a person familiar with the matter said, as European creditors aren’t prepared to offer substantially easier repayment terms on bailout loans to improve the nation’s debt outlook.

Euro-area finance ministers will meet in Luxembourg on June 15 to discuss debt-relief measures that the ECB has said are needed before it will consider purchasing Greek bonds. The so-called Eurogroup is expected to complete a review of Athens’s rescue program that would allow for the disbursement of at least 7.4 billion euros ($8.3 billion) in aid needed for a similar amount of bond repayments in July.

An agreement among the ministers will likely allow the International Monetary Fund -- whose participation in the rescue program is a requirement for many nations -- to commit in principle to a conditional loan, said the person, who asked not to be named because the discussions are private. But the extent and wording of debt-relief commitments probably won’t convince the Governing Council of the ECB to buy Greek bonds.