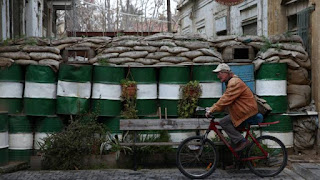 Cypriot leaders are set for fresh talks to try to reunite the Mediterranean island in spite of sharp differences over new security and political arrangements.

The UN-brokered talks in Switzerland aim to settle decades of ethnic division between the Greek Cypriot and Turkish Cypriot communities.

Security remains the most serious barrier to a deal between Nicos Anastasiades, the Greek Cypriot president, and Mustafa Akinci, the Turkish Cypriot leader.

Cyprus has been split since 1974, when Turkey invaded and occupied its northern third in response to an Athens-inspired coup aimed at uniting the island with Greece. A UN buffer zone divides the Greek-Cypriot state, an EU member, from the breakaway Turkish-Cypriot state, which is recognised only by Ankara.

More
Posted by Yulie Foka-Kavalieraki at 8:17 AM