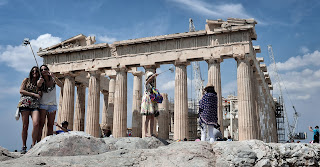 Fosun International Ltd., the Chinese conglomerate that’s part of a venture to transform the former Athens airport site into one of the biggest real-estate projects in Europe, is now turning its attention to Greek tourism.

Fosun wants to use its stake in tour operator Thomas Cook Group Plc to start building vacation packages specifically for the vast Chinese market, Senior Vice President Jim Jiannong Qian said in a May 4 interview in Athens. The Chinese government predicts 1.5 million of its citizens will start vacationing in Greece in the medium term.

Tourism accounted for over one-quarter of Greece’s gross domestic product in 2016, according to the Greek Tourism Confederation. Visitor numbers in 2016 reached 28.1 million, up 7.6 percent from 2015. Tourists generated 13.2 billion euros ($14.5 billion) in travel receipts, according to the Bank of Greece. Of these travelers, 150,000 came from China, Beijing says.

“Greece is a very safe place for visitors,” said Qian who is also president of Fosun’s Tourism and Commercial Group. There are also good opportunities for tourism investments in Greece, he said.