Greeks walk out in national strike over austerity 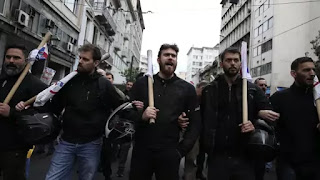 Greek unions staged a nationwide strike on Wednesday to protest against fresh austerity measures that parliament is being asked to approve as part of the country’s €86bn international bailout.

Civil servants and staff at state hospitals and public utilities took part in the 24-hour walkout, which disrupted international flights and other transport across the country.

The leftwing Syriza-led government of Alexis Tsipras, prime minister, signed up this month to a new €4.5bn package of medium-term fiscal and structural reforms in order to unlock bailout aid. Greece needs the aid to repay debt that matures in July.

Union leaders billed the strike as “a last chance” to influence the government ahead of Thursday’s vote on the measures, which are being debated as part of an omnibus reform bill under fast-track procedures in parliament.

“We’re betrayed by our own people. It’s the poor that are going to suffer this time more than any other group,” said Nassos Vardas, a retired construction worker and former official with the communist trade union PAME.