Greek Marathon Isn’t Over Yet 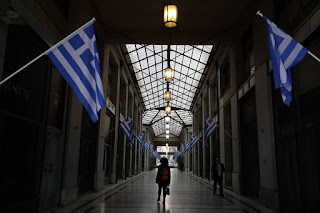 The eurozone is one big step closer to resolving its longest-running and most damaging crisis. But before anyone gets too excited, there is still a long way to go.

Greece this week finally agreed with its creditors on a package of reforms needed to unlock its next installment of bailout cash. With the economy stalling and major bond redemptions falling due in July, Athens badly needs the money.

But as things stand, it won’t receive a cent until the International Monetary Fund is satisfied that there is a credible plan in place to put Greece’s debt on a sustainable footing. Without this, the IMF won’t lend anything to Greece—and without the IMF on board, the German government has said it won’t give Greece any more money either.

The stage is therefore set for another difficult negotiation, this time pitting the IMF against Greece’s eurozone creditors led by Berlin. It could be a bruising fight.

The first argument will be over how much debt relief Greece is likely to need. That will hinge in part on what budget surpluses Greece’s creditors expect it to achieve in the medium term. The bailout program currently envisages Athens delivering a primary surplus in 2018 of 3.5%, before interest costs, and maintaining this for 10 years. But no one thinks this is realistic.