Euro-area finance ministers gathered in Brussels on Monday, seeking a compromise with the International Monetary Fund on debt relief for Greece that could signal the final act in the seven-year-old drama for the continent’s most indebted state.

The IMF is reluctant to participate in a bailout unless the euro area ensures the country’s 315 billion-euro ($355 billion) debt load is sustainable. Some nations like Germany, which resists altering Greece’s debt profile, won’t release any new funds until the Washington-based fund joins the program. Athens needs the new aid installment before it has to repay about 7 billion euros to lenders in July.

“The starting positions are all rather wide apart,” French Finance Minister Bruno Le Maire told reporters before the gathering. “There’s a lot of work that needs to be done to bring the positions closer.”

The so-called Eurogroup meeting began after finance ministry deputies earlier in the day failed to resolve the outstanding issues, as disagreements between the IMF and Germany over Greece’s economic outlook and required debt relief persisted, according to two European Union officials with knowledge of the talks, who asked not to be identified because the discussion was private. 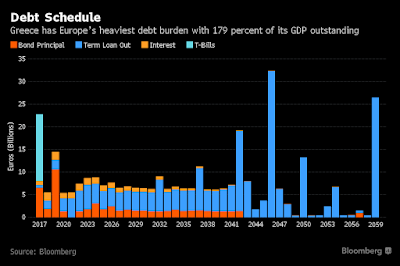 Posted by Yulie Foka-Kavalieraki at 6:05 PM