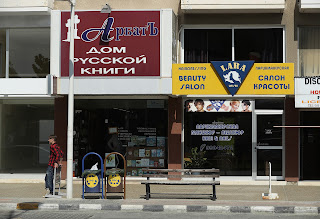 by Yalman Onaran & and Vernon Silver

In Limassol, on the southern coast of Cyprus, shop signs in Cyrillic outnumber those in Greek, the local language. Yachts emblazoned with Russian monikers fill berths in a newly built marina. And just past the office of radio station Russkaya Volna, restaurants lining the boardwalk serve pelmeni with, of course, vodka.

This Moscow-on-the-Mediterranean has blossomed as Russians and their money flock to the tiny European Union outpost to become, in a sense, not Russian. Long known as a hub for offshore Russian finance -- and more recently as a focus of investigations into Russian links to President Donald Trump’s entourage -- Cyprus has enabled a more sophisticated way to camouflage those funds: If you can’t launder a Russian’s cash, the scheme goes, launder the Russian himself.

The wave began after the government streamlined its money-for-passports program to help Cyprus recover from the 2013 collapse of its banking system and an ensuing recession. Now foreigners can become citizens in less than six months in exchange for investing at least 2 million euros ($2.2 million) in Cyprus property or 2.5 million euros in government bonds or companies.

Since then, the nation has issued about 2,000 passports, Finance Minister Harris Georgiades said in an interview in Nicosia last month. About half have gone to Russians, according to PricewaterhouseCoopers and other consultants who guide clients through the process. The impact has been profound, sparking about 4 billion euros of foreign investment last year -- equivalent to almost a quarter of the island’s annual economic output.