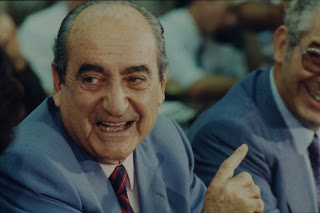 Constantine Mitsotakis, the Greek prime minister who strengthened ties with the European Union and attempted unpopular cuts to state spending in the 1990s, has died. He was 98.

He died in the early hours of Monday morning, according to a statement from his family.

Mitsotakis became prime minister in April 1990 when his New Democracy party won the right to govern on its own after nine years in opposition or as a coalition partner. During his three-year tenure, he consolidated Greece’s membership in the EU, known as the European Communities at that time, by securing his country’s accession to the union during the Maastricht Summit in December 1991. As foreign minister, he oversaw Greece’s entry into the EU a decade earlier.

As the Cold War was coming to an end, the pro-American Greek leader improved relations with the U.S. in 1990 by becoming his country’s first prime minister in 27 years to visit the White House, during George H.W. Bush’s administration.