Athens calls on creditors to strike a deal 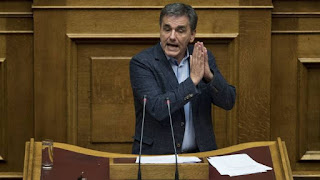 Greece is calling on its creditors to strike a deal that would allow it to honour billions of euros in debt repayments, arguing that it has upheld its side of the bargain by pushing through painful tax and pension reforms.

IMF officials and eurozone finance ministers will hold talks on Monday intended to pave the way for Athens’ next tranche of bailout aid so that it can make more than €7bn of debt repayments in July.

“Greece has done its bit, most would say more than its bit,” Euclid Tsakalotos, Greece’s finance minister, told the Financial Times.

He added that a deal would open the door to the country’s participation in the European Central Bank’s economic stimulus programme and provide “the signal to the markets that so many investors have been waiting for”.

The aid is dependent on bringing the IMF into the bailout programme as a financial partner.