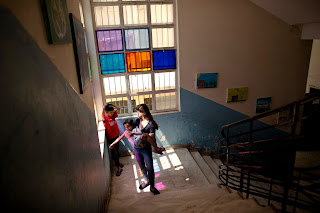 It may seem paradoxical, but Greece’s anarchists are organizing like never before.

Seven years of austerity policies and a more recent refugee crisis have left the government with fewer and fewer resources, offering citizens less and less. Many have lost faith. Some who never had faith in the first place are taking matters into their own hands, to the chagrin of the authorities.

Tasos Sagris, a 45-year-old member of the Greek anarchist group Void Network and of the “self-organized” Embros theater group, has been at the forefront of a resurgence of social activism that is effectively filling a void in governance.

“People trust us because we don’t use the people as customers or voters,” Mr. Sagris said. “Every failure of the system proves the idea of the anarchists to be true.”

These days that idea is not only about chaos and tearing down the institutions of the state and society — the country’s long, grinding economic crisis has taken care of much of that — but also about unfiltered self-help and citizen action.