On 7 April in Malta, euro-area finance ministers agreed on the key elements of a deal that would unlock further financial assistance to Greece under the current (third) €86 billion bailout. The “in principle” agreement came as a huge relief, as Greece will be unable to meet the €7.4 billion in debt payments due in July without external financing.

But the economic drama continues. Several more steps need to be taken for Greece to avert default.

First, the troika of creditors must return to Athens to finalize the review and present it to Eurogroup ministers by June at the latest. Once it has agreed terms, Greece needs to legislate the agreed measures to ensure that, ignoring outstanding debt, tax income exceeds spending by 3.5% of GDP annually (what is known as a primary surplus) at least until 2020. Prime Minister Alexis Tsipras, leader of the ruling radical left Syriza party, has said he would not submit the measures to a vote in parliament without agreement on debt relief. Creditors, on the other hand, say that debt relief will not be discussed before the measures are voted, and the review is completed.

Once staff-level agreement is reached, the IMF needs to decide whether it will participate in the Greek program with financing. Some euro-area creditors – notably Germany and the Netherlands – have made it clear they will not approve further assistance to Greece without IMF participation. The roadblock? The IMF believes the Greek debt is “highly unsustainable” at 180% of GDP, and has said it would only present a program to its executive board if it receives “satisfactory assurances on a credible strategy to restore debt sustainability”. 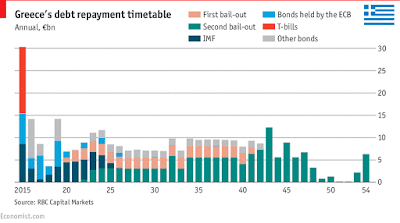