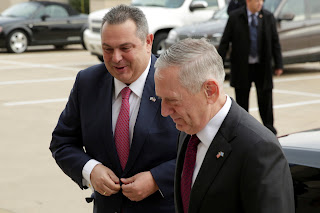 Before Donald Trump’s election turned much geopolitical conventional wisdom on its head, if you were in the Greek government, you’d have to be a fool to proclaim, “Only America can help us.”

But someone has, and the fact that it was a member of a coalition led by a radical left-wing party, Syriza — whose members have traditionally opposed United States policy — underlines the contradictions of a government comprising members of the extreme left and extreme right. It shows also how the past seven years of austerity and reforms have reshaped politics and attitudes. And it suggests that anti-Americanism in Greece has faded over the past few years, as the Obama administration supported Athens’s efforts to remain in the common European currency and preached against creditors’ harsh treatment.

Above all, it suggests that in difficult times, old alliances become more precious.

Suspicion and sometimes vilification of the United States by the left has been a standard feature of Greek politics since 1947, when the Truman Doctrine and later the Marshall Plan helped stave off a Communist victory in the civil war that followed World War II and the German occupation. Then, a right-wing military dictatorship from 1967 to 1974 had at least tacit support from Washington. Each year, a march commemorating the student revolt that triggered the end of the junta culminates at the United States Embassy, a constant reminder of a complicated past.