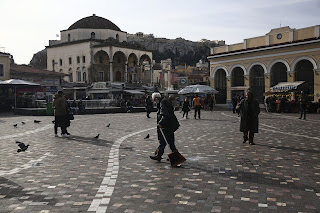 Greece and its international creditors struck an agreement at a meeting of euro-area finance ministers in Malta on Friday, breaking the latest deadlock over the country’s rescue and paving the way for about 7 billion euros ($7.5 billion) in aid for Athens.

The two sides, which have been wrangling over key economic overhauls for months, reached a tentative agreement which allows bailout auditors to return to Athens to finish negotiations on the measures that Greece needs to implement to qualify for the next tranche of emergency loans. Although Friday’s decision represents progress, the euro area won’t unlock the payout until their audit is concluded.

“The big blocks have now been sorted out and that should allow us to speed up and go for the final stretch,” Dutch Finance Minister Jeroen Dijsselbloem, who leads the euro-area meetings, told reporters at the conclusion of the talks. “Further work will continue in the coming days with a view of the mission returning as soon as possible to Athens to complete the work.”

Talks between the government of Prime Minister Alexis Tsipras, euro-area creditors and the International Monetary Fund have been stalled for months as the parties haven’t been able to agree on how to amend Greece’s pensions, labor market and tax system. Greece finally accepted a proposal which was presented earlier this week.