The Refugee Archipelago: The Inside Story of What Went Wrong in Greece

Widad Madrati remembers the first snowfall at Oreokastro like most children would, as a thing of wonder. It threw a brilliant white cover over the squalor of a refugee camp pitched in the grounds of a disused warehouse in the hills above Greece’s second city, Thessaloniki. The 17-year-old Syrian did not mind that the water pipe to the outdoor sinks had frozen. She took photographs of the icicles.

The photos on her phone show nothing of the broken chemical toilets or the discarded, inedible food; nor of the flimsy tents pitched on freezing ground by refugees, like her family, who arrived too late to find a spot inside the concrete shell of the old warehouse. Instead, her photos show children playing in the snow.

Stranded outside the Oreokastro buildings, in a tent dusted with snow, the other members of the Madrati family were more realistic about survival and begged the authorities and volunteers for a way out of the camp. A family of four when they left Aleppo who became five along the way when Widad’s sister Maria was born in Turkey, they had endured worse indignities in Greece than pleading.

The family was also among the last to leave their previous temporary home at Idomeni, where they held on for 10 weeks after the chaotic encampment on Greece’s northern border closed in March 2016, in the hope it would reopen. It did not. 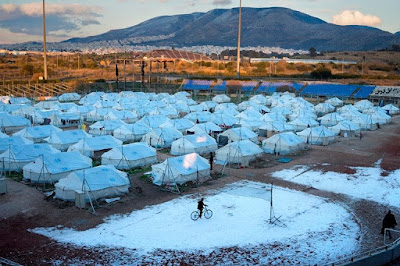 Posted by Yulie Foka-Kavalieraki at 4:00 PM