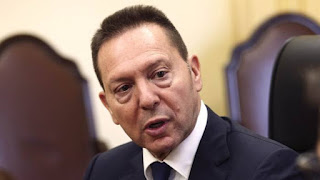 “Growth turned positive for the year [2016] as a whole, contrary to initial forecasts,” he told the Delphi Forum, an annual gathering of Greek economists, businesspeople and politicians, on Saturday. “A rapid closure of the review will help the economy build on the 2016 outperformance and move quickly to a faster growth path.”

Sounding an upbeat note for the first time this year, Mr Stournaras endorsed the EU’s latest growth forecast for Greece of 2.7 per cent this year rising to 3.1 per cent in 2018. The economy expanded by 0.3 per cent last year, despite falling back into negative territory in the fourth quarter

“Some recent softening of economic indicators can be put down to uncertainty in the face of delays in closing the second review of the programme. Hopefully this is now moving forward,” he said.