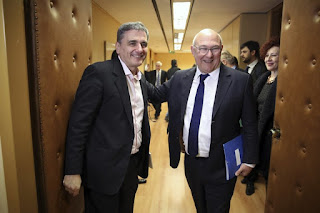 Greece is seeking help from France, its close ally in the 19-country eurozone, as it seeks to overcome stubborn sticking points in its bailout talks and return to international bond markets later this year.

France's Prime Minister Bernard Cazeneuve and Finance Minister Michel Sapin were in Athens Friday for talks, as negotiations with bailout inspectors in the Greek capital continued for a fourth consecutive day.

"France is here to facilitate things, to show to everyone and to the institutions that it is time to reach an agreement, that it's time to look to the future," Sapin said.