Greece Edges Toward Another Crisis as Bailout Quarrel Persists

Greece is set to miss yet another deadline for unlocking bailout funds this week, edging closer to a repeat of the 2015 drama that pushed Europe’s most indebted state to the edge of economic collapse.

Euro-area finance ministers meeting in Brussels on Monday will reiterate that the government of Alexis Tsipras has yet to comply with the terms attached to the emergency loans that have kept the country afloat since 2010. While Tsipras had promised the long delayed review of the latest bailout would be completed by March 20, a European official said last week that reaching an agreement even in April is now considered a long shot.

The two sides are still far apart on reforms demanded by creditors in the Greek energy market and the government in Athens is resisting calls for additional pension cuts. And while discussions continue on how to overhaul the labor market, a finance ministry official said in an email to reporters on Friday that the issue can’t be solved in talks with technocrats. 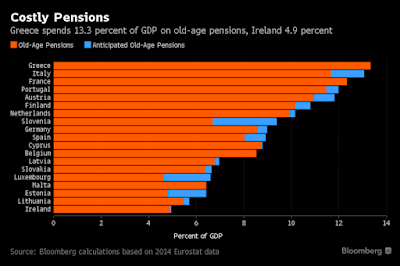