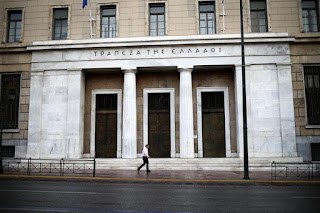 Banks have relied on emergency liquidity assistance (ELA) drawn from the Greek central bank since February 2015 after being cut off from the ECB's funding window due to stalled bailout talks between the government and its official lenders.

More
Posted by Yulie Foka-Kavalieraki at 6:11 AM