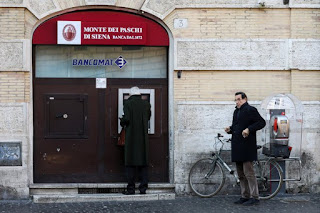 Even as global stock markets climb, worries are building among investors that long-simmering debt troubles in Greece and Italy will put additional strain on the euro.

Over the past year, aggressive bond buying by the European Central Bank and encouraging signs of economic growth across Europe have helped the eurozone overcome a series of political jolts, including Britain electing to quit the European Union and Italian voters rejecting the proposals of a reform-minded government.

Yet with the central bank expected to eventually unwind its purchases of government bonds and other assets, investors are increasingly becoming concerned about how Europe — and Germany, in particular — can cope with escalating debt pressures in Italy and Greece.

The result has been a sell-off of European government bonds as investment funds reassess the risks of holding such securities. In Italy, for instance, some hedge funds are making direct bets that the prices of Italian bonds will collapse.

The yield on Italy’s benchmark 10-year note — which moves in the opposite direction of its price — has doubled to 2.3 percent since late last fall. The yield on the equivalent Greek note has jumped to nearly 8 percent from 6.7 percent at the beginning of the year.

More
Posted by Yulie Foka-Kavalieraki at 8:58 AM