The IMF Staff Has It Right on Greece 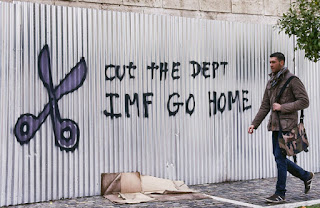 When the International Monetary Fund’s board met Monday to discuss Greece, it was heartening to read that “most Executive Directors” agreed with the staff’s view that the country’s debt, at 179 percent of gross domestic product at the end of 2015, was “unsustainable.” Yet “some directors had different views on the fiscal path and debt sustainability.” This division within the board also applied to what Greece still needs to do with its budget. With the medium-term primary fiscal surplus heading to 1.5 percent of GDP, “most Directors agreed that Greece does not require further fiscal consolidation at this time.” But, again, “some Directors favored a surplus of 3.5 of GDP by 2018.”

Despite the backing of a majority of the board for the staff’s technical assessment that Greece does not need to tighten its budget screws further but does require debt reduction, the institution is still unable to break a deadlock that harms the country, undermines the integrity of the euro zone, and puts the IMF’s own finances at some risk. Understanding why sheds light on the outdated governance that still plagues the IMF’s good functioning, dents its global standing and weakens its effectiveness.