The IMF Should Get Out of Greece 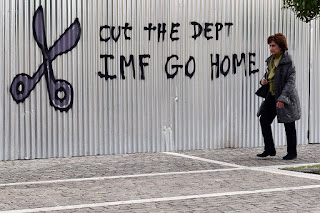 The International Monetary Fund's involvement in Greece has been an unmitigated disaster: Time and again, its failure to heed crucial lessons has visited suffering upon the Greek people. When the fund's directors meet on Monday, they should agree to forgive the country's debts and get out.

The IMF should never have gotten into Greece in the first place. As late as March 2010, with concerns about the Greek government's ability to pay its debts roiling markets, Europe's leaders wanted the IMF to stay away. Europeans feared that the fund’s financial assistance to one of their own would signal broader weakness in the currency union. As Jean-Claude Juncker famously put it: “If California had a refinancing problem, the United States wouldn’t go to the IMF.”

Nonetheless, German Chancellor Angela Merkel decided that the IMF’s presence was the signal needed to persuade German citizens that Greece needed urgent financial support and that strict discipline in the use of those funds would be enforced. Merkel’s political priorities coincided with the interests of Managing Director Dominique Strauss Kahn, who was desperate to pull the IMF out of irrelevance. From that moment on, the IMF became Europe's -- mainly Germany’s -- instrument in Greece.