Save Greece by Saving Its Economy First 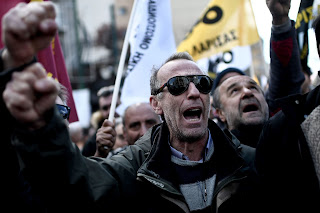 With the Greek government set to run out of cash by the end of July, the country’s main creditors in Europe continue to demand harsh budget cuts as a condition for crucial loans. But after a decade of failing to save Greece, Germany and other European nations, along with the International Monetary Fund, ought to try a different approach, one that makes reviving the economy a priority.

Greece’s creditors appear willing to provide new loans to pay off debts coming due this year as long as the country commits to achieving a fiscal surplus of 3.5 percent of gross domestic product before interest payments by 2018. The I.M.F., more sensibly, has argued for a surplus of 1.5 percent. It also says that European officials should commit to reducing the Greek government’s debt, which is so huge that it equals about 180 percent of the country’s annual economic output. That debt relief could come in various forms, including giving the country more time to repay or reducing the amount owed.

The monetary fund is right. Requiring the country to run big budget surpluses when its economy is growing at an annual rate of only 0.4 percent is cruel and counterproductive. Based on current trends, the fund projects that the country’s debt will increase to more than 250 percent of G.D.P. during the next several decades. European officials are much more optimistic, but that hopefulness is based on the dubious assumption that Greece can run large budget surpluses for decades to come.