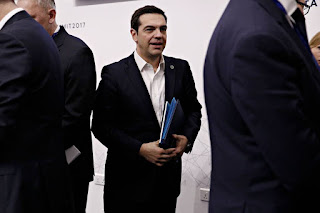 The Greek government is split over how to break a deadlock with creditors that has revived bond-market jitters and talk of “Grexit.”

Some aides to Prime Minister Alexis Tsipras are pressing for immediate fiscal concessions, while others are pushing for a tough stance toward the government’s creditors and the International Monetary Fund, Greek officials said.

The debate within the government, which is led by the Syriza party, comes as the IMF haggles behind the scenes with the German-led eurozone over the duration of Greek austerity and the cost of debt relief.

Amid the wrangling, doubts are mounting in financial markets about whether Greece can fulfill the tough terms of its latest, €86 billion ($91.9 billion) bailout plan, signed in 2015. The bailout was Greece’s third since 2010 and is encountering the same problems as the others: Repeated fiscal retrenchment is straining Greek politics without restoring confidence that the country can grow and recover. 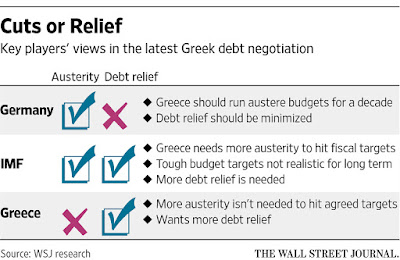 Posted by Yulie Foka-Kavalieraki at 7:14 PM