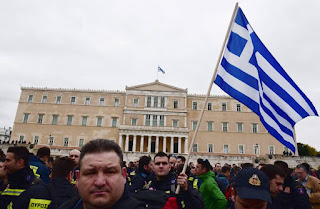 No one wants another Greek debt crisis, least of all just ahead of a series of knife-edge elections in Europe. No one this time is trying to push Greece out of the eurozone. No one thinks what Greece needs now after eight years of acute depression is another dose of austerity. Nor does anyone seriously think Greece’s current debt burden is sustainable. So why is Greece once again back in the headlines, its future in the eurozone again called into question amid yet another standoff with its creditors?

The official explanation is that Greece’s bailout program is being held up by a dispute over the country’s fiscal targets. Under the deal struck in 2015, Greece is supposed to achieve a primary surplus before interest payments in 2018 of 3.5% and maintain this surplus for the medium term. Germany says medium term should mean 10 years; the European Commission would prefer it to mean one or two years. This matters because Germany has said it would only continue to fund Greece’s bailout if the International Monetary Fund puts money in too—and the IMF will only participate if the numbers add up. The lower the surplus target, the bigger the debt relief needed to make the numbers add up. That is a problem for Germany.

To make matters more complicated, the IMF takes a very pessimistic view of Greece’s current fiscal position. It now seems clear that Greece delivered a primary surplus of at least 2% in 2016, far above the initial program target of minus 0.5%. With the Greek economy now growing, the European Commission is confident the country can achieve the 3.5% target for 2018 with few extra fiscal measures. But the IMF says this year’s surplus was largely due to one-off factors and is sticking to its forecast that the surplus will only amount to 0.9% in 2018. Just to reach the 3.5% target in 2018, the IMF says Greece will need to legislate in advance extra austerity measures equivalent to 2% of gross domestic product. Athens says this is politically impossible. Brussels agrees.