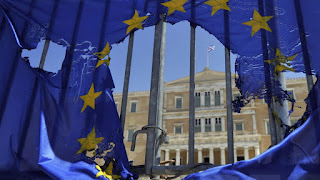 Greece fought austerity and austerity won. When Alexis Tsipras, the brash young leader of a left-wing party, became prime minister in January 2015, he vowed to stop taking the economic medicine that shrank the country's economy by a quarter, saw more than a million jobs disappear and drove thousands of Greeks below the poverty line. His European counterparts, who had lent Greece more than 200 billion euros ($215 billion) to prevent its default, had a simple response: no. Six months later Greece's banks were shuttered, its stock market was closed, the economy was falling back into recession and the country stood on the brink of expulsion from the euro zone. Tsipras blinked, accepting a new bailout on terms harsher than those he had rebelled against. For more than a year, an uneasy peace held between Athens and Brussels, and Greece's place in the euro seemed assured. But the International Monetary Fund, which is barred from lending to countries unable to repay their debt, in early February 2017 said it didn't think Greece could meet fiscal targets set in the 2015 bailout. That makes it hard for the fund to remain as a creditor. It also threatens to unravel the 2015 deal; the IMF's commitment is necessary to keep Germany and other states as creditors. Wide divisions among euro-area states over the common currency and upcoming German elections further complicate any resolution.

More
Posted by Yulie Foka-Kavalieraki at 1:23 AM