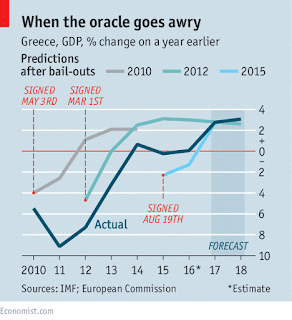 If history repeats itself first as tragedy and then as farce, it continues thereafter as endless iterations of Greek debt dramas. The script is wearyingly familiar. Greece’s European creditors are trying to close the second review of its third bail-out, which was signed in August 2015. That would enable them to lend Greece the funds it needs to meet €6.3bn ($6.7bn) of bond repayments due in July. But talks have run aground ahead of a meeting of euro-zone finance ministers in Brussels on February 20th. Bond yields have spiked, German ministers are issuing barbed comments, and dust is being blown off the Grexit files.

The review covers everything from health care to military wages. But thanks to pressure from the IMF—which has not yet joined the bail-out, as it did the previous two—Greece faces more pressing demands: to pass tax and pension reforms worth 2.5% of GDP, to kick in after the bail-out expires. Alexis Tsipras’s hard-left Syriza government will struggle to get these measures through parliament, but the alternative is to call elections that Syriza would probably lose to New Democracy, a centre-right party. Thousands of farmers wielding their produce took to the streets in Athens in outrage at more austerity (see picture). Unions are pondering further protests.

Greece has become a bystander to its own tragedy. The conditions attached to the bail-outs drastically reduce the government’s control over economic policy. For many Greeks, this makes politics itself pointless: 17% do not know a party they support (or will not say), while 15% will not vote at all. What sets today’s drama apart is the dispute among Greece’s creditors. These date back to the complex architecture of euro-zone bail-outs, jerry-built in haste in 2010. But today the debate is more public, and potentially more serious.