Greece Teeters Back to the Edge of the European Union 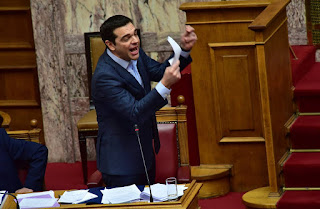 Greece’s Prime Minister Alexis Tsipras has been in a defiant mood lately. Some say it’s just a ploy, others believe he’s sincere. Either way, he could be pushing his country back to the brink of Grexit.

Speaking to his party’s central committee earlier this month, the prime minister had harsh words for Wolfang Schäuble, speaking of the German finance minister’s “constant aggressiveness” against Greece and his “contemptuous remarks” toward the country.

At the same meeting, Mr. Tsipras also accused the International Monetary Fund of not telling the eurozone the truth about the requirements for Greece’s recovery. The IMF, he raged, has lost “all scientific credibility” because of its handling of the Greek crisis.

Last month, on the second anniversary of his party’s rise to power, Mr. Tsipras claimed that the latest review of Greece’s third bailout program would be completed without his government having to legislate “a single euro” in new fiscal measures.

And earlier, during a Dec. 20 speech in Crete, he defended the bonus he offered to 1.6 million pensioners, against the protestations of Greece’s creditors. “No one has the right,” he said, “to tell us how we will make use of the surplus sums that stem from the hard work of the Greek people.”