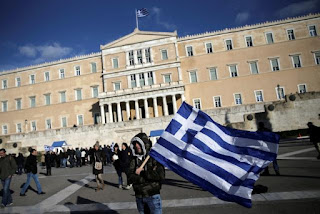 European Union officials urged Greece and its lenders on Thursday to conclude a long-overdue bailout review quickly to safeguard economic recovery but Athens said it wouldn't ask "a euro more" from its austerity-wracked citizens.

Inconclusive talks between Greece and its international creditors on economic reforms and debt relief are in danger of retriggering the crisis that almost ended in Greece being pushed out of the euro zone two years ago.

Failure to agree on various aspects of what must be done has cast doubt over the future of Greece's 86 billion euro (£73 billion) bailout programme, with new aid withheld while the stalemate persists.

On Thursday, EU officials were urging speed to avoid catastrophe and one German politician close to Chancellor Angela Merkel hinted that one bone of contention - the participation of the International Monetary Fund - may be got around.