Greece Faces Creditors in Brussels in Bid to Salvage Talks 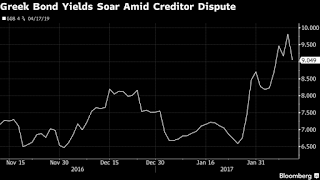 Europe’s bailout monitors sat down with Greece on Friday to outline a new rescue plan meant to avert a brewing crisis that could -- once again -- threaten the integrity of the currency bloc.

Dutch Finance Minister Jeroen Dijsselbloem, who heads the meetings of his euro-area counterparts, along with Klaus Regling, who runs the euro area’s crisis fund, were set to present the offer to Greek Finance Minister Euclid Tsakalotos in Brussels, according to an official with knowledge of the meeting.

Greece and its creditors are scrambling to complete a review of the nation’s bailout, which would pave the way for additional aid before about 6 billion euros ($6.4 billion) of bonds come due in July. The new proposal would require Greece to legislate additional fiscal cuts equal to about 2 percent of its gross domestic product, which would be triggered if the country failed to meet certain budget targets, another official said.

Dijsselbloem said in an interview that he hopes the two sides would come to an agreement on issues including the labor market, pensions, taxes and budget. “Greece must reach a budget surplus of 3.5 percent and there are discussions about what is needed extra,” he said.

A Greek official sought to damp expectations from the meeting, telling reporters in Brussels that no deal is expected on Friday, and talks shouldn’t be dramatized. The official asked not to be named, in line with policy.

Posted by Yulie Foka-Kavalieraki at 6:04 PM