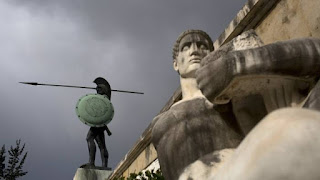 With much of the eurozone economy humming along nicely, and the sovereign debt crisis that engulfed the single currency region having largely receded, it is easy to forget that the country where it all started is still deep in trouble.

This week the enduring problem of Greece took a new and disturbing turn. It was revealed that the executive board of the International Monetary Fund is split on the question of what fiscal surplus Greece should be required to hit — which in itself will affect whether it needs official debt relief to reach sustainable growth.

Disputes between the IMF and the eurozone governments are hardly new but the fact that the fund admitted a division between its member countries is significant. European nations are over-represented on the board relative to their size in the global economy. Wielding that power to dissuade the fund from demanding debt relief from eurozone governments is a clear conflict of interest and poses a threat to the fund’s credibility and independence.