Will Cyprus be reunified? 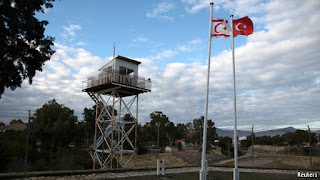 The formal split of Cyprus dates to Turkey’s invasion of the island in 1974, which followed a Greece-inspired coup aimed at enosis (union with Greece). Since then Cyprus has been divided between the Greek-Cypriot republic in the south, a full member of the UN and the European Union; and the self-proclaimed Turkish Republic of Northern Cyprus, recognised only by Turkey. Periodic attempts to reunify Cyprus have floundered, most recently in 2004 when the so-called Annan plan was backed by Turkish-Cypriot voters but rejected by three-quarters of the Greek-Cypriot majority. But since 2015 the leaders of the two communities have stepped up efforts to produce a fresh agreement they can sell to their voters. UN-brokered talks in Geneva broke up last week without a deal, but hopes remain high that the two sides will resolve their outstanding disagreements in time to hold dual referendums in the summer. Will Cyprus be reunified?

The constitutional model for a reunified state is a “bi-zonal, bi-communal federation”, based on deep decentralisation to the two communities and power-sharing arrangements at the centre. The recent talks have covered several contentious elements, including governance arrangements, territorial adjustments and compensation for Greek Cypriots who fled the north in 1974. There are also thorny economic issues to settle. But the trickiest matter is security. Under the republic’s 1960 constitution, Britain, Greece and Turkey have the right to military intervention in Cyprus should its integrity be threatened (this was the pretext for the Turkish invasion). The Greek Cypriots want to scrap these provisions, arguing that security is guaranteed by EU membership (Cyprus joined in 2004, although the EU’s writ extends only to the south). But the Turkish-Cypriot minority, harbouring bitter memories of intercommunal fighting that racked the island in the 1960s and ’70s, is wary of giving up protection from Turkish troops, some 30,000-40,000 of whom are stationed in the north. The three guarantor powers, which have been involved in the latest round of talks, must approve any security arrangements. Recep Tayyip Erdogan, Turkey’s mercurial president, may be a stumbling block. He needs the support of Turkish nationalists in parliament for a set of proposed domestic constitutional changes, and they may balk at concessions on Cyprus.

More
Posted by Yulie Foka-Kavalieraki at 8:13 AM