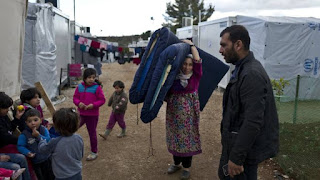 Turkey has warned Greece it could scrap a deal that helped stem the flow of migrants after a Greek court refused to extradite eight Turkish military personnel.

Mevlut Cavusoglu, Turkey’s foreign minister, made the warning on Friday a day after Greece’s supreme court rejected Ankara’s request for the return of their men it accuses of involvement in last year’s coup attempt.

Mr Cavusoglu said Ankara was keeping its options open in response to the court’s decision in relation to the six army helicopter pilots and two technicians, “including the cancellation of the bilateral readmission agreement”.

Under the accord, Turkey agreed to take back migrants who crossed into Greece and failed to prove their asylum claims. Its cancellation would endanger a more ambitious deal being hammered out between Ankara and the EU that would allow countries in the bloc to return failed asylum seekers.

Scrapping the readmission agreement could encourage more migrants to attempt crossing the Aegean Sea to Greek shores and deal a blow to Athens’ ability to deal with the arrivals.