'Patients who should live are dying': Greece's public health meltdown 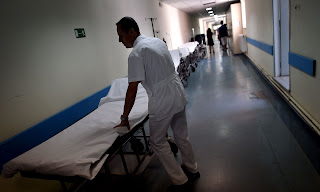 Rising mortality rates, an increase in life-threatening infections and a shortage of staff and medical equipment are crippling Greece’s health system as the country’s dogged pursuit of austerity hammers the weakest in society.

Data and anecdote, backed up by doctors and trade unions, suggest the EU’s most chaotic state is in the midst of a public health meltdown. “In the name of tough fiscal targets, people who might otherwise survive are dying,” said Michalis Giannakos who heads the Panhellenic Federation of Public Hospital Employees. “Our hospitals have become danger zones.”

Figures released by the European Centre for Disease Prevention and Control recently revealed that about 10% of patients in Greece were at risk of developing potentially fatal hospital infections, with an estimated 3,000 deaths attributed to them.

The occurrence rate was dramatically higher in intensive care units and neonatal wards, the body said. Although the data referred to outbreaks between 2011 and 2012 – the last official figures available – Giannakos said the problem had only got worse.