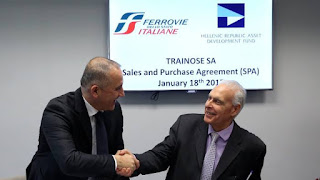 Greece has wrapped up the sale of its struggling rail operator TrainOSE to Italy’s state railway company as the leftwing government comes under pressure from bailout lenders to accelerate the country’s flagging privatisation programme.

The sale of 100 per cent of TrainOSE to Ferrovie dello Stato Italiane will bring in only €45m. But privatisation officials say it completes a series of infrastructure sales to international investors that will boost Greece’s role as a transport and tourism hub for the eastern Mediterranean.

TrainOSE runs a lossmaking international freight business and a subsidised passenger service linking mainland Greece with central Europe through Macedonia and Serbia. FS is expected to take over the operation of TrainOSE this year.

The sale has still to be approved by the European Commission and ratified by the Greek parliament. Following the signing of the sale agreement, the commission is expected to drop an investigation into allegations that €700m of government subsidies pumped into TrainOSE amounted to illegal state aid, Taiped officials said.