How Greece’s Troubled Economy Could Turn Around in 2017 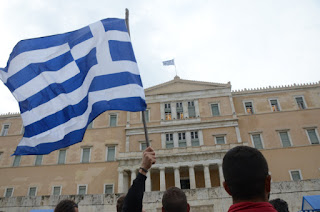 Violating the terms of its bailout program, the Greek government recently announced that it will distribute a sizeable “Christmas gift” to Greek pensioners even though this requires additional borrowing from the EU since the Greek budget is not balanced and Greece cannot borrow from money markets. The move has prompted the EU finance ministers to freeze implementation of debt restructuring. Greece is at the brink again.

This is the modern-day, Greek economic tragedy. But unlike the three-acts ancient Greek tragedies, we’ve seen many acts and often the horrible events happen on stage. Of the main actors, the Greek government repeatedly threatens with suicide elections; the IMF tries to apply the same rules to all countries irrespective of development level; the EU bureaucrats paint a rosy picture with no grounding in reality or economics, and German Finance Minister Wolfgang Schaeuble keeps reading the same austerity rulebook no matter what the circumstances. Even worse, there is practically no dialogue among the actors – they deliver their monologues past each other, each trying to please a different chorus. How did we get here (again), is there hope, and, more importantly, and how does it end?

After two large bailouts in 2010 and 2012 from the EU and the IMF, and after a negotiated haircut of €100 billion off its bonds, Greece was close to recovery in 2014. It had reversed the 2010 15-plus percent deficit and achieved a small primary surplus (before paying interest), reached growth after four years of recession, and even issued new bonds. However, the fiscal consolidation did not happen through spending cuts but rather through large increases in taxation, resulting in a multi-year recession. With Greeks having lost 25% of their income, and unemployment at 25%, disaffected voters brought to power a tiny, radical left party in early 2015.

More
Posted by Yulie Foka-Kavalieraki at 10:48 AM