Greek court to decide on fate of eight Turkish soldiers 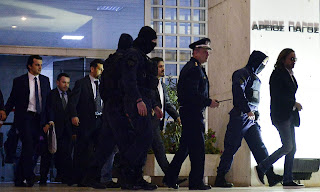 Greece’s supreme court will decide on Monday on the fate of eight Turkish military officers who fled their country a day after last year’s attempted coup in a case that has triggered outrage among intellectuals and is viewed as a test for European democratic values.

The hotly awaited judgment, six months after the doomed putsch against Turkey’s president, Recep Tayyip Erdoğan, has put considerable pressure on already strained relations between Athens and Ankara. “Turkey feels very strongly about this,” a senior official said. “Everyone is watching very closely.”

With the refugee crisis far from over and talks to reunify Cyprus at a critical stage, the ruling could send ripples across the turbulent Aegean Sea that divides the two longstanding Nato rivals. Erdoğan has made clear that he wants the eight men extradited in order to face charges of trying to overthrow the government.

He has publicly said that the Greek prime minister, Alexis Tsipras, has assured him the officers will be sent back. Turkey’s foreign minister, Mevlüt Çavuşoğlu, claims he extracted a similar promise from Nikos Kotzias, his Greek counterpart, during a telephone conversation on 16 July, the day the officers flew their Black Hawk helicopter across the border.