Greece’s Most-Wanted Terrorist, on Run Since 2012, Is Arrested and Charged 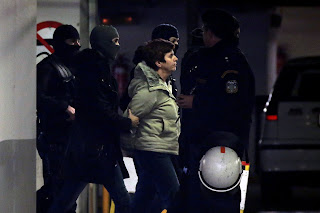 She was a leader of an anarchist group called Revolutionary Struggle. She helped organize, officials say, a car bombing near the country’s central bank. Later, the authorities say, she rented a helicopter using a fake name and then tried to hijack it in an effort to rescue her imprisoned partner.

On Friday, the anarchist leader, Panagiota Roupa, was charged with theft, forgery and participating in a terrorist organization. She was arrested on Thursday in a house in Ilioupoli, a middle-class suburb southeast of Athens, where she was living under an assumed identity. Her 6-year-old was taken into protective custody.

“Be careful with my son,” she told the officers, according to Theodoros Chronopoulos, the chief spokesman for the national police.

Greek officials called Ms. Roupa, 47 — known by her nickname, Pola — the country’s “No. 1 most-wanted” terrorist. With her partner, Nikos Maziotis, she was a leader of Revolutionary Struggle, which carried out a string of bombings and shootings targeting the police and others starting in 2003, and fired an antitank grenade at the United States Embassy in Athens in 2007. The attacks caused several injuries, but no deaths.

“She is the No. 1 most-wanted domestic terrorist, as she has been crucial in managing the Revolutionary Struggle, but more specifically in recruiting,” Mr. Chronopoulos said in a phone interview.

More
Posted by Yulie Foka-Kavalieraki at 1:56 AM