For Greece and Turkey, an Old Rivalry Flares 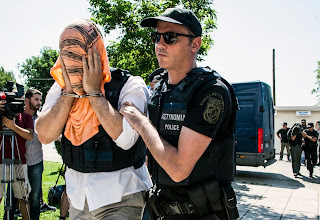 Eight Turkish military officers who may or may not have been involved in the attempted coup against President Recep Tayyip Erdogan last July are now at the center of a tense standoff between Greece and Turkey. At a time when Greece’s economy is still in limbo and Turks are caught between an increasingly authoritarian government and a surge in terrorist attacks, neither country can afford such a distraction. Yet the two neighbors find themselves at odds once again.

The men — two majors, four captains and two noncommissioned officers — turned up in the northern Greek town of Alexandroupolis in a military helicopter the day after the attempted coup. They have claimed that they were not knowingly involved in the rebellion — that they followed orders but were not aware a coup was in progress — but fled to escape persecution, asking for political asylum.

The government in Athens, one of the first to condemn the coup attempt while it was developing, was flustered. On the day the men turned up in Greece, Turkey’s foreign minister, Mevlut Cavusoglu, spoke by telephone with his Greek counterpart, Nikos Kotzias, and demanded their extradition. On Twitter, he wrote that Mr. Kotzias told him “that eight traitors who fled to Greece will be returned to Turkey as soon as possible.” The Greek Foreign Ministry said the asylum request would be examined on the basis of “the provisions of Greek and international law,” but “it will be borne very seriously in mind that the arrested parties stand accused in their country of violating constitutional legality and attempting to overthrow democracy.”

Since then, the officers have become a touchstone by which many Greeks are testing the independence of their own judiciary and their country’s democratic principles. Those Greeks feel that even if the eight were involved in trying to topple a legitimate government, they should not be sent back to face a judicial system that, they fear, cannot guarantee fair trials. For the Turkish government, however, the eight are traitors, and their flight to Greece was in itself a provocation.