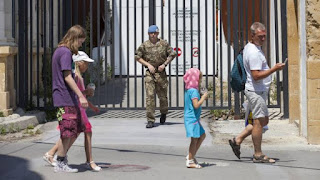 Should this week’s talks on a Cyprus settlement succeed there would be a host of reasons to welcome the outcome. There are, however, just as many grounds to be cautious about a breakthrough.

Nicos Anastasiades, the Greek Cypriot president of the internationally recognised government of Cyprus, and Mustafa Akinci, the head of the self-proclaimed Turkish Cypriot breakaway state in the north, are in Geneva to try to solve one of the world’s most intractable diplomatic disputes. The east Mediterranean island’s split dates to Turkey’s invasion in 1974, launched after a military junta in Athens tried to unite Cyprus with Greece.

But the political separation of the island’s two communities began in the early 1960s, soon after Cyprus won independence from British colonial rule. For more than five decades, a UN peacekeeping force has served as a buffer between Greek and Turkish Cypriots.

The reasons to welcome a settlement start with the nearby Middle East. A Cyprus solution would help the US, its European allies and friendly governments to concentrate on what they see as the regional menace of Isis and violent Islamist extremism.