A Greek tragedy: how much can one nation take? 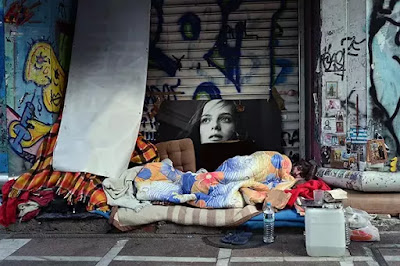 It has been more than 3,000 years since the remote Greek village of Efyra had its moment of fame. Perched on one of the rolling hills that undulate across the Peloponnese towards the western coast, it was named by Homer himself as a place that Odysseus once visited.

Today, Efyra draws no such strangers on heroic quests. It is lucky if the local bus, which strains to climb the twisting path to the town, stops more than once a day. For those who live here, it is not just its mythical past that prompts them to look back: many locals say it has no future.

“We are in danger,” says Aggelos Petropoulos, a local baker and the village’s mayor. “Everything is getting worse. Next year will be more so. Old people will die. Young people will not stay. We need help.”

This is a plea increasingly heard across Greece, after more than eight years of financial catastrophe. Today the country has become a byword for the brutal economic, political and social fallout that followed the 2008 crisis. The economy shrunk almost a third in the ensuing years, and the government is effectively bankrupt without outside support: it owes about €320bn — not far from double its gross domestic product of €181bn.