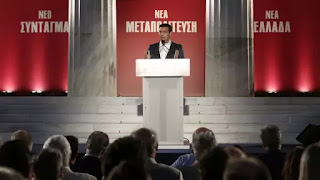 The fiery rhetoric against austerity is gone, at least for now. A more composed Alexis Tsipras says he welcomes foreign investment as “mutually beneficial” for business and for the country.

The prime minister and leader of the leftwing Syriza party is anxious to see Greece return to borrowing on international capital markets in 2017 after a three-year gap.

He has sacked some, though not all, of the far leftists in his cabinet who opposed an ambitious new €50bn privatisation programme agreed with the Greece’s creditors, the eurozone bloc and the International Monetary Fund.

Syriza’s policymaking has turned upside down since mid-2015 when voters in a referendum rejected tough new bailout proposals, heightening fears that Greece would crash out of the euro.

More
Posted by Aristides N. Hatzis at 8:20 AM