Tsipras in Search of EU Allies as Workers at Home Strike 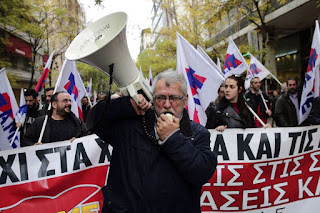 Greece is running out of friends in the European Union.

Renzi and Hollande have backed Tsipras’s calls against austerity as well as demands for more support on the refugee front, with the three of them joining forces to hold the first summit of Europe’s Mediterranean countries in Athens in September. With extreme right-wing parties and populists rising across Europe, Greece may need the pro-European German Chancellor Angela Merkel’s backing more than ever.

“Greece will keep having fewer allies,” said Aristides Hatzis, a professor of law and economics at the University of Athens. “Merkel is our only ally at the moment but even Merkel has her own limits as German elections are nearing.”