IMF denies it is trying to force more austerity in Greece 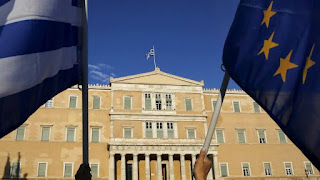 Senior International Monetary Fund officials have rejected claims that the organisation is seeking to impose more austerity on Greece, in a sign of tension over whether the fund will join the eurozone’s €86bn bailout of the country.

In a blog post published on Monday afternoon, Poul Thomsen, director of the IMF’s European department, and Maurice Obstfeld, the fund’s chief economist, say that their main worries are that Greece is pursuing policies that are “unfriendly to growth” and that country’s debt is “highly unsustainable”.

The post lays bare the gulf between eurozone and IMF visions of what the Greek bailout programme should look like. It also shows the level of frustration at the fund over what is sees as misrepresentation of its stance by leading eurozone policymakers.

Recent discussions have “spurred some misinformation about the role and views of the IMF”, the officials said. “We have not changed our view that Greece does not need more austerity at this time.”