If you build it, they will come: Greece’s new temple to high culture 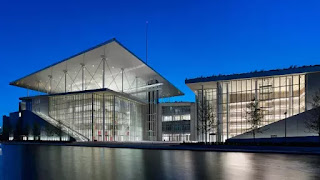 Even the most starry-eyed philanthropist might balk at spending €600m to build a temple of high culture in a country grappling with its worst financial crisis in memory.

Yet in 2006 when the Stavros Niarchos Foundation decided to build a new home for the Greek National Opera and the National Library, economic growth was accelerating and Greece looked set to become a beacon of prosperity in south-east Europe.

“Greece won the European football championship in 2004, it staged a successful Olympic Games, the economy was doing well,” says Andreas Dracopoulos, co-president of the New York-based foundation named for his late uncle, a Greek shipping billionaire.

“We thought Greece had turned the corner. If anyone had suggested otherwise at that time we’d have said ‘are you crazy?’” he adds.

In spite of the country’s financial collapse in 2010, followed by a succession of huge bailouts, construction of the Stavros Niarchos Foundation Cultural Centre went ahead as planned.

“I remember there was a dark night in New York when I and several colleagues had some internal questioning . . . ‘What are we doing? Greece is falling apart and we’re going to build an opera house and a library?’” he recalls. “Then I said we had to build it, this project will bring hope, we can’t let the Greeks down. And let’s do it all, not cut corners because of the crisis.”

More
Posted by Aristides N. Hatzis at 8:47 AM