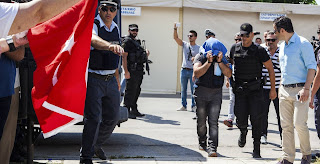 A Greek court rejected Turkey’s request to extradite the last two of eight military officers who fled to Greece in the wake of the failed coup attempt in their country, officials said.

This week, two sets of judges on the same court decided to extradite three of the soldiers while rejecting Turkey’s request for the extradition of the three others.

All decisions will be appealed to the country’s Supreme Court.

Turkey’s government has requested the rapid extradition of the men, whom it has described as traitors, to face charges of trying to overthrow the democratic constitution. Turkish prosecutors allege they belong to the network of U.S.-based Turkish imam Fethullah Gulen, who has been charged in absentia by Turkish prosecutors for leading a group Turkey lists as a terrorist organization. Mr. Gulen denies the claim.

The men have denied the charges and told the Greek court they fear for their lives if they are returned to Turkey. Greek and European laws don’t allow extradition to a country where the suspect will be in danger of torture or if his or her life is at risk.

The judges sitting on the Appeals Court on Monday and Thursday ruled that the officers’ lives will be in danger; they might be subject to torture and won’t get a fair trial, Greek officials said.