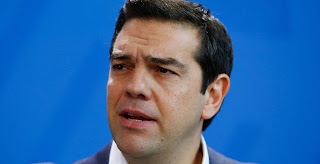 If last year was the year of upheaval and survival for Alexis Tsipras, this year has been the year of the slow grind. As we near the end of 2016, Mr. Tsipras finds himself squeezed—by Germany and the International Monetary Fund, by Turkey and the refugee crisis, by his false promises and collapsing popularity—to the point of political extinction.

The pace of decline in the Greek prime minister’s fortunes is remarkable. Coming into the final quarter of the year, the government appeared to have a narrative and a plan. In early October it put the finishing touches on the first review of its third bailout program—albeit a year later than initially expected. Mr. Tsipras and his economic team then set the ambitious target of finalizing the second review by the Dec. 5 meeting of the eurozone finance ministers. This would have cleared the way for the European Central Bank to buy Greek government bonds under its quantitative-easing program, sending a strong signal of confidence to investors.

There were warning signs, of course, that all would not go smoothly. Mr. Tsipras’s government ministers continued, for instance, to obstruct central planks of the bailout program, especially the privatization of state-owned assets. But doubters were told to ignore the noise. A cabinet reshuffle in early November, sidelining some members of this internal resistance, was an encouraging sign.